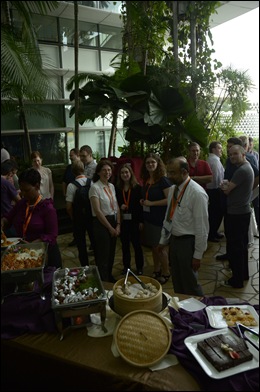 This year’s international conference on preservation of digital objects, aka iPRES2011, kicked off today with two tutorials and a welcoming reception in a tropical rain forest on the fifth floor of the National Library of Singapore’s imposing building. Some 170 delegates are expected – some new faces, some familiar faces (in the photo at right those in the know may recognise Andreas Raupert (back), Angela Dappert, two Czech colleagues, Paul Wheatley, and behind him Cal Lee and Adrian Brown.

Considering the size of Singapore (small), the building of the national library is huge (picture below). And I am not kidding about the rain (city) forest – the library organizes special garden walks through the tropical gardens scattered throughout the building. 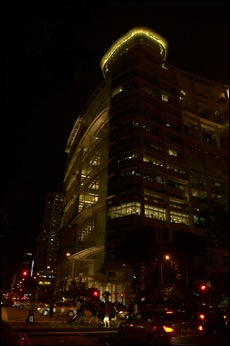 As for the rain: thunderstorms flood the city like clockwork every afternoon between 2 pm and 5 pm. But the city is prepared: almost every street has an arcade over the sidewalk, so it is only for street crossing that you need your umbrella. And when you enter a store, a plastic umbrella bag is on offer to keep the floors from getting wet.

We are in the modern part of town, with American-style malls, Starbucks and McDonalds, but a mere 15 minute subway ride away there is little India, and in another direction Chinatown, and in another direction again there is the Arab quarter. The government buildings, street names, school uniforms and orderly queues are colonial British. The Chinese (Taoist) temple stands shoulder to shoulder with the Hindu temple, which leans against .. a concrete modern Ibis hotel.

Forgive me the touristy chitchat; this was most amazing jetlag (have-to-stay-awake-at-all-costs-after-flying-in-at-5.40AM) day possible. From tomorrow on you’ll get all the serious stuff from me again. 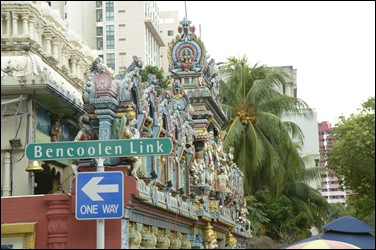 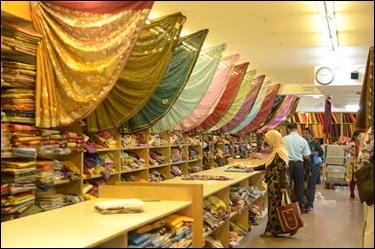