The organizational panel was a showcase for the many different ways in which institutions develop methods to cooperate in digital preservation.

David Giaretta of the Alliance for Permanent Access to the Records of Science (APA) drew a picture of the many initiatives in the European research arena. Digital preservation, David asserted, is not a separate activity, it must be fitted into the research infrastructure. The European Commission is funding many R&D projects in digital preservation (Planets, ParseInsight, CASPAR, Shaman, etc.; you can google them for more info). If truth be told, the variety of institutions and projects is quite overwhelming – perhaps that is why David’s slides have a tendency to be that as well 😉 – here’s an example that can keep you busy for a while. 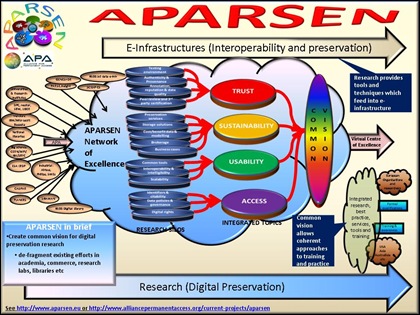 Present efforts are focused around APARSEN, with over 30 participating organizations. The intention is to establish a Europe-wide competence center for digital preservation. A new acronym for me was SCIDIP-ES. Here is the accompanying elucidating slide: 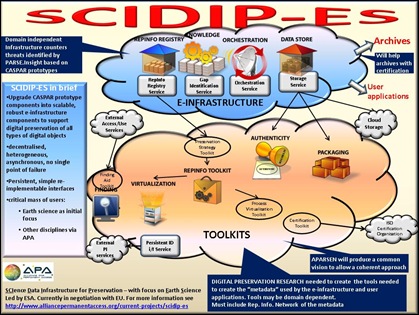 Europe is also working on a three-tiered audit and certification system that makes a lot of sense to me: it allows institutions to grow into certification:  there is a light-weight instrument for basics (the Data Seal of Approval), a second level of self-audit, and then a super-level of external audit. 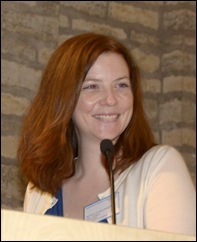 While the Alliance clearly takes the technical requirements as its starting point, the US NDIIPP program draws its inspiration from the social context, from ‘shared values’ and ‘common goals’ – Michelle Galinger (left) told the conference. NDIIPP began as a project organization, but as time went on the need was felt to build something more committed, something more sustainable. This led, in 2010, to the establishment of the National Digital Stewardship Alliance (NDSA), in which partners ‘commit to formalized roles and structure within alliance’.

A third genre of DP organizations are the national coalitions, mostly bottom-up voluntary networks of custodial institutions across the borders of traditional domains (archives, libraries, museums, research institutions). The UK DPC and German nestor are networks to promote awareness and share knowledge and expertise. The Dutch NCDD goes a step further and intends to build an infrastructure (see yesterday’s post).

All of the above are enabling organizations, facilitators. To my mind things get really interesting when institutions actually start sharing the burden of digital preservation. Not surprisingly, reciprocal hands-on networks like these have mainly sprung up in the United States. Martin Halbert of North Texas University summarized the distributed preservation approach: 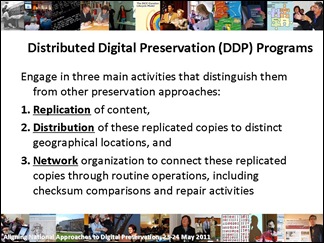 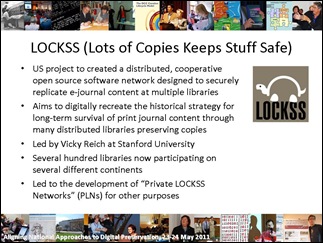 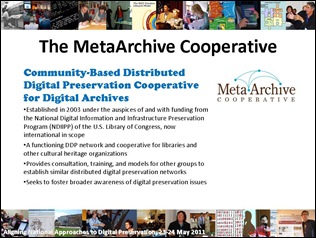 The American version of the distributed preservation approach is not undisputed. LOCKSS is about bit preservation, and especially in Europe there are those that believe that without proper preservation strategies the job cannot be done. At this conference I got the distinct impression that for economic reasons, thinking is turning in the direction of spending our money on relatively simple preservation methods for the short term, especially because it is very difficult to tell what will be valuable in the future. Matthew Woollard of the UK Data Service spoke out in this direction. After some years the material can be reappraised and more expensive preservation strategies can be applied to selected material only.

Lively discussions about organizational aspects during the break-out session.

One of the nice features of this conference, I thought, was the room for conversation, for discussion. During this break-out session Laura Campbell’s idea for a global preservation body (see blog) was pretty much rejected. It was felt that while the organizations doing the actual preservation must have continuity and long-term commitment, interaction between these organizations should be more fluid, more spontaneous. The International Internet Preservation Consortium (IIPC, see recent blogs on their General Assembly) was repeatedly mentioned as an excellent example of how fluid, voluntary groupings of people with similar problems can work in the  21st century.

The conclusion was that in DP (not unlike in many other situations) one size does not fit all. Commonalities, shared problems, are basic to successful types of cooperation, and sometimes these must be context- and culture-specific. It was also said, during another session, that in a young field such as digital preservation we need to experiment with different approaches in order to discover what works and what does not.

At the end of the day, Laura Campbell and I, over dinner, thought of a very fluid and informal network to address some issues that really need addressing on a high international level, such as how to redefine our collection profiles within a digital paradigm. To be continued!

PS: Meanwhile the conference has come to a close. But there is good stuff yet to share with you. So, if you will bear with me, I will go on blogging about it for a few more days. Until the story is told.

Conference reception: We were so captivated by the singing of the National Library’s Women’s Choir, that the excellent food remained untouched for quite a while …