As this iPRES was moved from Tsukuba, Japan, to Singapore because of the earthquake and tsunami in Japan in March this year, it was only fitting that iPRES2011 should include a panel session on disaster planning. Neil Grindley (JISC) asked if digital preservation does not implicitly include disaster planning, but Angela Dappart (DPC) argued that with an entire infrastructure going down, the problems will be massively larger. Plus, as Arif Shaon (STFC) observed, ‘Grade A preservation should include it, but we have not reached that stage yet.’

Shigeo Sugimoto of Tsukuba, who would have been iPRES’s host in Japan, took a forward-looking view at disaster planning. Many physical artefacts were lost during the earthquake, and having lots of digital copies at different locations can certainly help rescue cultural heritage, provided the metadata are kept at different locations as well. 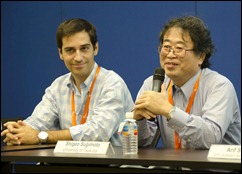 Shigeo Sugimoto (right) with José Barateiro of Portugal during the disaster planning session.

There is one catch, though: many smaller institutions do not have the means (money, staff) to build digital archives. Therefore, in Japan the idea has been put forward to design a robust and easy-to-use cloud-based service for small institutions: 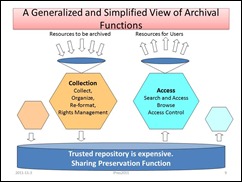 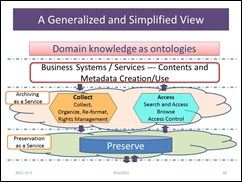 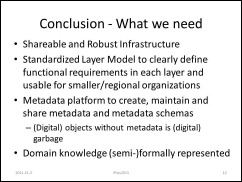 In the Netherlands, I am involved in two Dutch Digital Preservation Coalition (NCDD) working groups who are looking at the same problems: how to enable smaller institutions to preserve their digital objects. Professor Sugimoto and I have agreed to stay in touch and exchange information and experiences.