In a conference about alignment a session on standards is very well placed, for standardization is a form of alignment in and of itself. And yet, we have all heard the adagium with which Raivo Ruusalepp (left) opened the session: ‘Standards are great; everybody should have one.’ There are so many standards: digital preservation standards, external standards that we really do not know the value of (e.g., PDF), standards from specific domains – ‘it’s like a Chinese menu we have to choose from.’ OAIS is of course the most well-known and well-used DP standard (but for organizations to advertise that they are ‘OAIS-compliant’ is utter nonsense; OAIS is a reference model, a framework of concepts, nothing more, nothing less).

Speaking also on behalf of Estonian colleages Mihkel Reial and Kai Idarand, Raivo went on to describe how the Estonians reacted to a massive cyber attack four years ago. They agreed to step up security measures – but whether the words have always been turned into actions is up for debate.

Matthew Woollard of the UK Data Service (photo right) told the conference why his organization went through an ISO 27001 certification process that cost it no less than GBP 100,000: for pragmatic reasons, in order to secure annual funding to the amount of GBP 1 million. ‘A reasonable investment,’ he concluded  with a quite British sense for the understatement.

Matthew Woollard went on to make a pitch for the Data Seal of Approval in the context of present European efforts to develop a three-tiered certification system (see also previous post). ‘Read the DSA,’ he said, ‘it is simple, it is understandable, and it may help you understand your organization better.’ He expects that at some point in time, some level of certification may be required for any organization participating in EU-funded projects.

Cal Lee of the UNC School of Information and Library Sciences dealt with contextual information (metadata) and the conventions and standards involved in those. I must admit that some of it was too technical for my (policy & communications) brain – my apologies, Cal (check out his slides on the conference website in due course). But he made a few fundamental assertions with regard to metadata standards that merit reproducing: 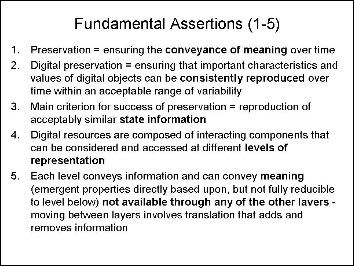 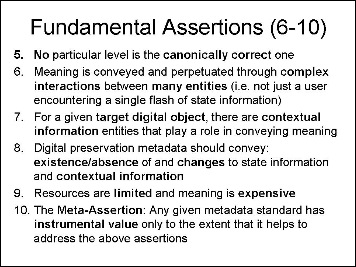 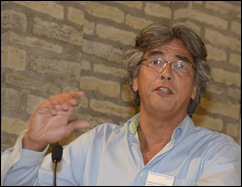 Bram van der Werf of the Open Planets Foundation (photo right) raised some fundamental issues of his own with regard to standards. He said: ‘Most major challenges are about people.  Standards are basically designed to allow less clever people to perform activities that clever people have designed. Thus quality requirements and standards are most suited to deal with static challenges. Digital preservation is by no means a static field; rather it is a moving target. Thus one may wonder if standards really help to improve digital preservation. I would propose that we start thinking in terms of current best practices and accept that they will evolve continually.’

Hans Hofman of the Dutch National Archives (also attending on behalf of the International Council of Archives) suggested that there are many standards already available that also relate to digital preservation, such as international record keeping standards. He feels that we keep reinventing the wheel if the DP community does not make use of these. As an archivist, he also felt dat the discussions at this conference were being dominated by libraries and their collection approach to digital preservation, and if there ever is a next conference (there was talk of that possibility), we should find the common ground between libraries and archives (which is active management over time of digital objects) and focus on that. 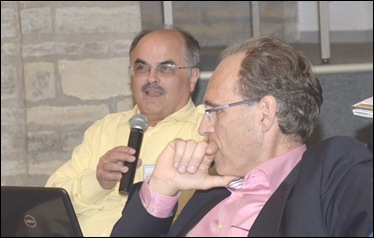 David Giaretta, APA (left): ‘I never thought I would say this, but I actually agree with Hans’ [Hofman, right in the photo]

It was also argued that digital preservation is not an activity in itself – it is part and parcel of an entire work flow and standards should reflect that. Matthew Woollard would like to see them become more context- and culture-specific. 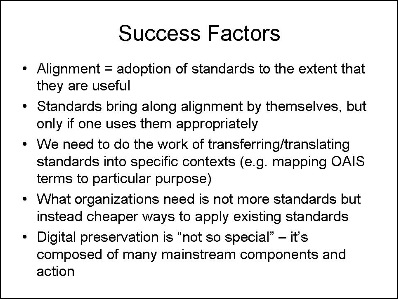