Netwerk Digitaal Erfgoed > Activiteiten > Blog > Aligning with most of the world (iPRES2011, 8) 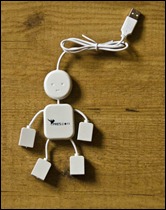 iPRES is organized alternately in Europe, in North-America and in Asia in order to include people and discussions from all continents – Africa and South-America are still on the Steering Committee’s wish list. However, when you looked at the list of presenters at iPRES2011, it was the usual suspects that dominated: Europe, North America, Australia/New Zealand. I asked a Programme Committee member about that, and he told me that some papers had been submitted from Asia, but they were deemed not good enough to make it to the programme.

To my mind, there is a bit of a contradiction in this. Of course we want high-quality papers at iPRES, but it is a bit risky to take our (western) stage of development as a yard stick for what constitutes “quality”. As Cal Lee phrased it: “Digital preservation tends to be quite regionally myopic.” I would suggest that the next iPRES organize a special track or workshop day for those that are just beginning to think about digital preservation, or that work from a very different context than a “western” one and focus on their specific circumstances and challenges. 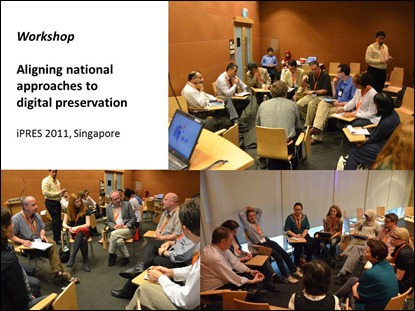 Fortunately, there was one workshop that expressly invited members from “other” countries. It was the workshop “Aligning national approaches to digital preservation”, a follow-up from last May’s Tallinn conference (see my blog posts), put together by Cal Lee from the University of North Carolina. Yes, there were usual suspects presenting as well (including yours truly), but in this post I shall mostly  ignore them in favour of new input:

Özgür Külcü, from Hacettepe University, Ankara, Turkey, described Turkish participation in the AccessIT project, whereby an online education module with practical information about digitisation issues and protection of cultural heritage was developed. And in the context of the InterPares 3 project the Turkish team is helping translate digital preservation theory into concrete action plans for organizations with limited resources. But many issues remain: 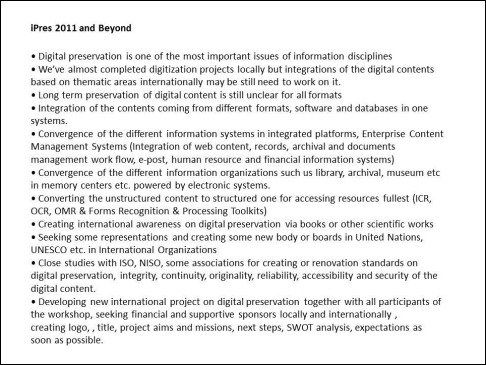 Masaki Shibata from Japan, revealed the results of a DRAMBORA 2.0 test audit carried out at the National Diet Library in Japan: 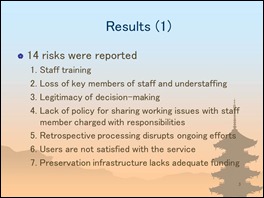 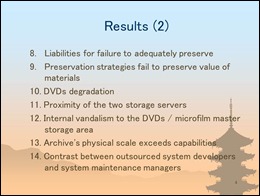 Shibata admitted that, unfortunately, the risks mentioned in the final report largely remain unsolved. ‘We were caught up in an illusion that there was an ideal solution to ensure long-term digital preservation,’ he said. ‘We tried to address the risks only by means of systems development.’ Also, specific Japanese and NDL circumstances played a role, such as the rigidness of the fiscal, budget, employment and personnel system; language difficulties and geographical constraints; lack of digital conservators; and a cultural context of preservation. Shibata concluded that an international alliance for digital preservation ‘would become a boost/tailwind for national policymaking in Japan.’

Daisy Selematsela from the National Research Foundation of the Republic of South Africa, described the outcomes of An audit of South African digitisation initiatives before focussing on “Managing Digital Collections: a collaborative initiative on the South African Framework”, a report published earlier this year, which is meant to provide data producers with high-level principles for managing data throughout the digital collection life cycle; and the Train-the-trainer programme: 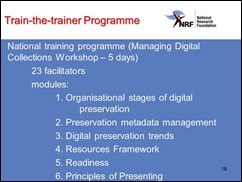 As for international alignment, Selematsela concluded: 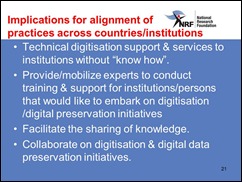 Raju Buddharaju of the National Library of Singapore (photo right) suggested that we first need a better understanding of what we mean  “alignment” and what we mean by digital preservation (what do we include, what do we exclude)  before we can try and come to workable initiatives.

The workshop was originally designed as a one-day event, but in the end the conference organizers only gave us 3 hours on Friday afternoon. The good news was that despite the time of day and conference fatigue, more than fourty participants showed up and they conducted animated discussions on such topics as: costs; public policy and society; and preservation & access.

But it was difficult to reach any concrete conclusions. There are many good intentions, but it continues to be difficult to find the common ground that leads to practical results. Steve Knight of the National Library of New Zealand (photo left) questioned whether there is any real will to collaborate, e.g., on putting together a much-needed international format (technical) registry. Talking about education, finally, Andi Rauber suggested that because there is no well-defined body of knowledge, we might prefer a range of “friendly competing curricula” rather than an aligned body – for the time being.

Which only goes to show that, like Singapore itself, alignment comes in many shapes and sizes. 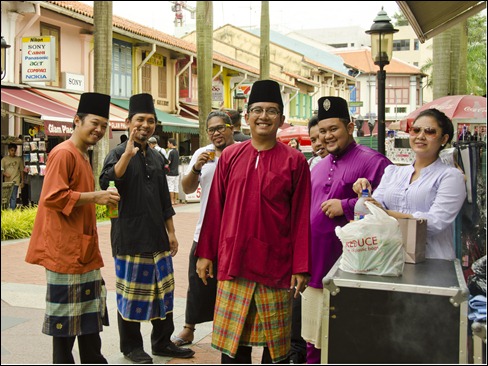