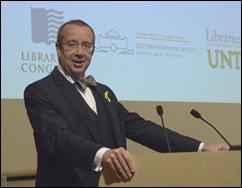 At the beginning of the conference (more in previous post), the President of the Republic of Estonia, Toomas Hendrik Ilves (left), provided the attendees with a powerful reminder of why we are all involved in this business of preserving our heritage at all. Referring to successive occupations of Estonia by German and then Soviet troops, he recounted efforts to destroy the Estonian culture, e.g., by destroying 10 million books, and ‘supplanting national awareness with some bizarre fairy tales.’ When Estonia became independent, in 1991, KGB files disappeared by the thousands, in order that occupation misdeeds might not be uncovered. Now Estonia is trying to retrieve and preserve whatever was not lost, because ‘information and knowledge help people stand against totalitarianism.’ 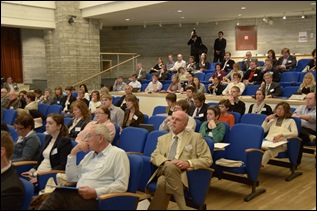 This leaves us with the question how we are going to do that, and, at this conference in particular, the question how we stand on aligning our efforts internationally.
The first day’s keynote came from Laura Campbell, Assistant Librarian for Strategic Initiatives at the Library of Congress, and leader of the LoC National Digital Information Infrastructure and Preservation Program (NDIIPP). Under the motto ‘Together we can light up the world’, she recounted the development of NDIIPP from a bag of Congress money into an organization to fund DP projects, and on into a central node, a non-authoritarian team leader, of digital preservation initatives in the US with 185 partners in 45 states. The NDIIPP approach has a strong social element, with mottos like ‘Learn by doing (let’s learn from our mistakes)’ and ‘We are a network of people’. 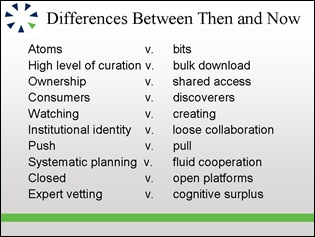 Laura’s summary of changes in our (digital) environment since NDIIPP began is worthwhile reproducing (see slide at right). And she had some good quotes as well: ‘Seamless integration? You can try it, but it is extremely difficult.’ ‘Diversity & interaction drive innovation.’ ‘Deliberate planning does not work; we need loose collaboration instead.’ ‘As storage costs go down, it will soon be possible to think about collecting everything – is that a wild idea?’ 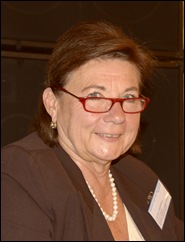 In order to promote international alignment, Laura Campbell suggested the establishment of an international preservation body with a focus on policy, perhaps assisted by an advisory expert group to identify what categories of digital objects are most at risk. The body could promote an international notion of collection, work on standards and tools, and maybe maintain a common index of preserved materials.
Is this idea going to land at this conference? Laura invited ideas from the community.

The organizers (Educopia Institute, see previous post) have set ambitious goals for themselves – to build an agenda for concrete action towards international alignment from this conference. Let’s see what happens!
The conference program includes six distinct thematic panels with corresponding breakout sessions for discussion. The panels are: technical alignment; organizational alignment; standards alignment; legal alignment; educational alignment; economic alignment. Some (would) argue that you cannot really separate these issues. We’ll see about that too.

Let me share some highlights with you (from my own perspective – which is more about policy and communications than hard-core technical stuff; let other bloggers help to complete the picture! e.g., http://digitalplusresearch.blogspot.com/).

Technical alignment panel: our present preservation systems are a leap of faith 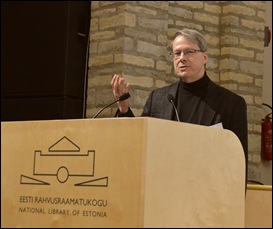 Michael Seadle of the Berlin School of Library and Information Science (photo right) opened the technical panel as follows: ‘I want you to become uncomfortable.’ He and Andreas Rauber of TU Wien (and Planets) told the conference straight out that the technical systems that we rely on presently to preserve our digital objects have not been tested. In truth, we have no clue as to how well our present systems function.’

Some way to start the day! Half the audience was still jet-lagged. The others all woke up at 4 a.m. this morning, when the superbright Nordic sun shone into our hotel room windows (and when we all went online to check out the Iceland ash cloud and stayed awake worrying about getting home later this week).

But Michael and Andy are right, of course. Michael: ‘Vendors are promising too much.’ and: ‘We are buying archiving systems on faith.’ Even though Robert Sharpe of Tessella put up a valiant effort to defend his systems, there is still so much we do not know. The technology has not been proven. So, what we need is two things: a) testing, transparent, objective testing to check the functionality of the systems and uncover the weaknesses; and, b) for the time being expectations must be managed: those in our institutions who purchase the systems must know what they are buying, what the limitations are. (Which sparked a comment by Swedish National Librarian Gunnar Sahlin that leadership in our organizations is being challenged by the very complexity of the systems leaders have to decide about.)

On the topic of an international body, Andy was not immediately convinced. ‘Perhaps we can work with a small group of organizations that want to work on testing and benchmarking first.’

Organizational alignment panel: changing from an analogue to a digital paradigm

Let me Mirandize you before reading what follows: I chaired this session myself. 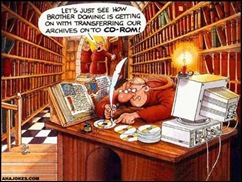 I set the scene with the well-known cartoon of Father Dominic transcribing a monastery’s archives on to cd-rom – with a quill (left). I argue that it is true that our organizations have been receiving and collecting digital objects for about ten years now, but fundamentally, the organizations that do the work are still firmly grounded in a sense of the world that is analogue, with at most a thin coat of digital veneer. Our staff are still daunted by the scale of the digital phenomenon; we still think in terms of traditional collection profiles (books in libraries, research data in repositories). And so on. (Notable exceptions are the beta sciences; they went digital very early on.)
More interesting than describing the past is looking at the future: what will it take to successfully organize digital preservation within a truly digital framework? With my co-panellists I came up with six criteria against which to measure a number of case studies and future initiatives: 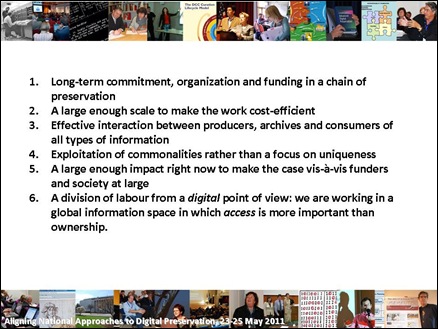 (I am afraid I must leave you to ponder these overnight. There will be more tomorrow and the day after. At some point in time, I blogged semi-live. Now I am multi-tasking. Which is better overall, but introduces a slight time delay on the blog.)

But before I go: at the end of the first day, the National Library treated us to an Estonian cultural treasure that no occupying force could ever squash: Estonian singing: angelic, moving, wonderful. It was the Women’s choir of the National Library itself that performed for us, that just celebrated its 20th anniversary. I cannot blog such beauty, but perhaps, if you look at this picture and close your eyes, you will pick up some notes …. 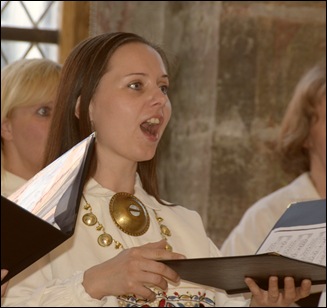