The quote in the title comes from a tiny sticker I found here in the conference room. I almost missed it, it is that small. I do not know who put the stickers out there. Perhaps the barcode could tell me, but I haven’t downloaded the app yet. In any case, the quote is one to pass on to you, and in a (bit of a creative) way, it brings together the two keynote speeches on day 2 of iPRES2011. [Post script: Henk Koning of DANS tells me that this is the url: http://mialnttf.tumblr.com/]. 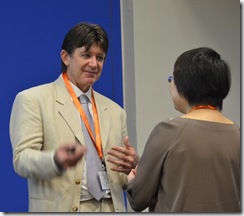 Mick Newman of the Australian National Film and Sound Archive (photo left) spoke about  ‘Preserving motion film, so much to do and so little time …’ Mick made no secret of his ‘lovely chauvinism’ for analogue film – the film experience for him includes a buzzing reel of acetate film (nitrate being a bit too flammable, after all). Like Richard Wright (BBC) last week in Hamburg, Newman reported that the transition to digital is slow. And not as easy as, e.g., for documents, because films are complex objects containing high-quality images and high-quality sounds, and an ISO file format such as motion-JPEG2000 works for the image, but does a mediocre job with sound. And the files are huge: a 35-mm film with 350,000 frames will turn into a 10 TB digital object. A complex object at that, with formidable metadata challenges (here’s the link to the title), with complicated intellectual property regimes for script, sound, music, set design, etc. etc., causing Newman to quote Karen Van Malssen saying ‘It doesn’t matter what the question is, the answer is metadata.’

At the end of his talk, Newman showed a slide with the pros and cons of analogue preservation vs. digital preservation, and the very fact that he showed the slide at all was notable. In the library and archives community nobody thinks in terms of those ‘or-or’ terms anymore. But, then again, they tend to keep the physical originals whereas Newman made clear that preserving analogue films is very demanding and thus expensive. 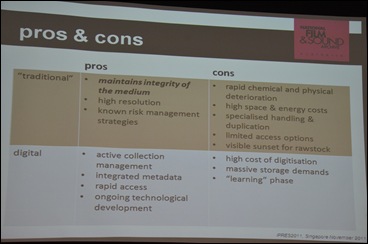 In the next keynote the focus was shifted to research data, with Ross Wilkinson of the Australian National Data Service ANDS. Like Seamus Ross yesterday morning (see earlier post) Wilkinson made the case for preservation in terms of added value rather than controlling risks (see last week’s post). With research driving innovation, however, I think his argument is a lot more compelling (towards funders, that is) than just referring to our ‘memory’ and ‘identity’ – which are hard to express in terms of dollars and euros. 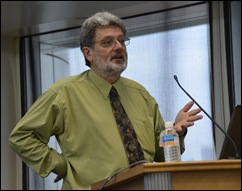 Wilkinson (photo left) focussed on increasing the value of research data, a.o. by connecting different databases to generate new information to enable new types of research (and some of that value must come from metadata, hence another creative link to my title). Wilkinson’s added value list is as follows:

‘Data is more valuable, if …

‘To do so, it must be managed, connected, discovered, and then re-used – it has to move out of the lab.’

Who is going to do all that work? Wilkinson believes in partnerships – many have a role to play in the process. The researcher, the institution, ‘data carers’ in all shapes and sizes (data librarians, data scientists, etc.), discipline-specific repositories and more general archiving institutions such as ANDS (and DANS in the Netherlands).

Moving research data from the private to the public sphere: each partner has a role to play in adding value to the data

Plus, of course, a number of stakeholders that have a role to play in motiving researchers to share, such as funders and key players in scholarly communications such as publishers. If data become citable, more researchers will be willing to share.

To conclude, this is Wilkinson’s favourate case study of research data reuse: 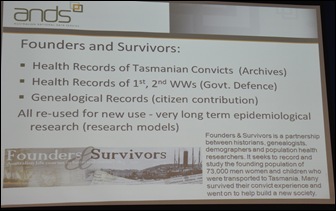 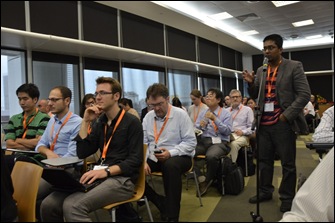 Q&A: Arif Shaon of STFC in the UK 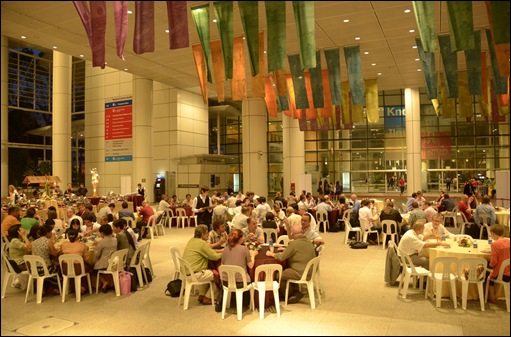 Conference dinner in the library’s plaza. Yes, the food was again wonderful. And the lemonade kept us sharp for the next day (the barley flavour was especially tasty) 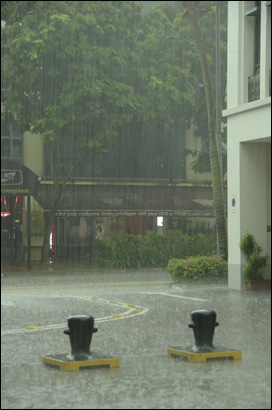 Our kind hosts put an umbrella in the conference pack …