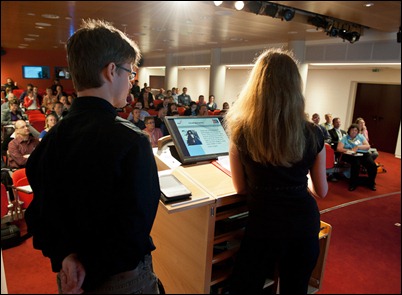 The IIPC 2011 General Assembly (see previous blog post) came to a close last Friday in an atmosphere of optimism. Martha Anderson of the Library of Congress told me: ‘We did not realize it fully until this conference, but we are very close now to opening up and joining our collections. That is something we have always wanted to do within the IIPC, but we never knew how.’

Aaron Binns of the Internet Archive expressed ‘personal excitement’ when he talked about the Memento project at Los Alamos, which won the DPC Digital Preservation Award last December (see also earlier Dutch blog). ‘Up till now we were still very much working within our own silos. Now for the first time there is a potential framework to work with. Memento can help us realize shared access, which is the whole point of the IIPC.’ Rob Sanderson (aka Azaroth42) of Memento attended the IIPC meeting to report on the progress that is being made. 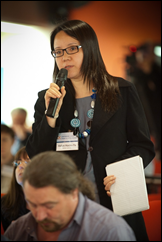 Binns also reported progress in other areas. Archiving social media and interactive websites remains quite a challenge for the community, he said, but ‘we are making progress. Facebook may be crawlable in the end.’

Another important topic at IIPC 2011 was quality assurance. Checking the quality of harvested websites is presently a labour-intensive manual affair. But Helen Hockx reported on promising work at the British Library to automate quality checks, and Binns expressed confidence that the IIPC community can build on those – although there are still a lot of open questions.

During this General Assembly the IIPC also reached out to its users, as reported yesterday. In retrospect I wonder if the discussions would have gone in another direction if the IIPC had invited humanities researchers in addition to social scientists. Are humanities scholars content with the contents of the web archives? But perhaps it is much too early to assess the value of web archives for researchers in general. As Sophie Ham of the KB, national library of the Netherlands, said during her brief presentation on Monday: ‘If we plant our seeds within the right atmosphere, our diamonds will grow bigger and bigger.’ The KB started harvesting in 2007, so its on-site access to 700 websites is but a beginning of bigger things to come.

During the meeting, the IIPC and the Dutch KB said their farewells to Hilde van Wijngaarden, who in the past ten years developed into one of the driving forces behind digital preservation research & development at the KB and who was an active member of the IIPC steering committee. She is moving on to head the library at the Amsterdam University of Applied Sciences. KB and IIPC will miss her.

Next year’s IIPC General Meeting will be held at the Library of Congress in Washington, DC, the date is yet to be announced, but it is probably going to be May again. ‘Researchers are used to searching in incomplete collections. For them, I guess, that is part of the fun.’